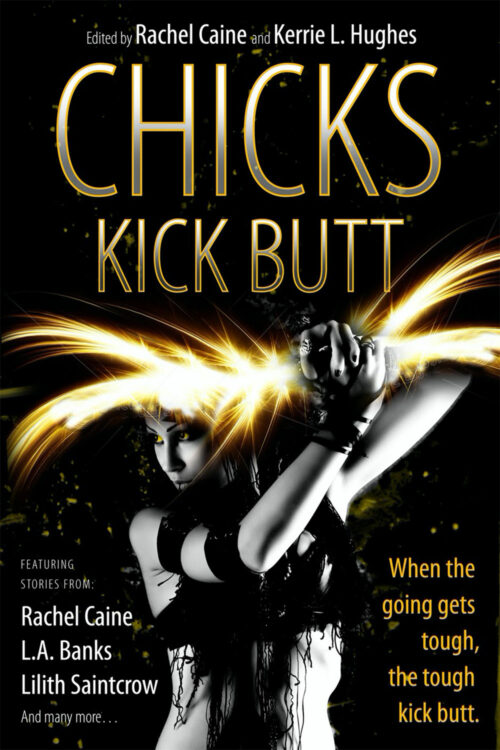 Chicks are awesome—and never more so than when they are kicking some serious vampire / werewolf / demon  /monster butt.

Chicks Kick Butt is an anthology that features one of the best things about the urban fantasy genre: strong, independent, and intelligent heroines who are quite capable of solving their own problems and slaying their own dragons (or demons, as the case may be).

Mist is one of the ancient Valkyrie, charged by Odin to preserve the Treasures of the Gods during the Last Battle that was to bring about the end of all worlds. But no end came, and now, in the modern world, Mist must contend with the return of the evil god Loki and the treacherous elf who is her only ally.

*This story was later published as Freeze Warning.

—an axe age, a sword age
—shields are riven—
a wind age, a wolf age—
before the world goes
headlong.
No man will have
mercy on another. 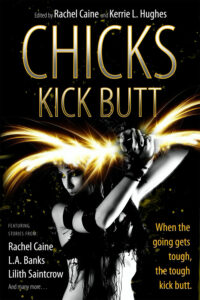 The sword sliced the air inches in front of Mist’s face. She swung Kettlingr to intercept the blow, bracing herself and catching the blade in mid-stroke. Metal clanged on metal with glorious, discordant music. Her opponent bore down hard for several seconds, his furious gaze fixed on hers, and abruptly disengaged.

“One of these days,” Eric said, his face breaking out in a grin, “I’m going to beat you.”

Mist lowered her own sword and caught her breath. Perspiration trickled from her hairline over her forehead, soaking the fine blond hairs that had come loose from her braid, and her body ached pleasantly from the hard workout. She grinned back at Eric, who sheathed his sword and reached for the towel draped across the bench against the wall.

He grimaced and scrubbed the towel across his face. “I outweigh you by eighty pounds,” he said. “I don’t want to think about what you could do to me if you were my size.”

Size had nothing to do with it, though Mist hadn’t yet found a way to tell Eric why he’d never be able to beat her. She’d even thought once or twice of letting him win, male pride being such a fragile thing, but instinct was too strong.

There had been a time when her kind had been no more than choosers of the battle-slain, bearing the trappings of war themselves but never baring their swords. Ragnarok had changed Odin’s handmaidens, as it had changed so much else.

Mist sheathed her own sword and stroked the runes engraved on the hilt. She had no right to pride of any kind. She had but one purpose in Midgard, and it had been her only reason for living after everything she had known was gone. The fact that she had permitted herself a relationship with a man after so many centuries was an aberration, a reckless act of defiance against her fate.

And yet Eric had roused her from the despair of one who waits for redemption that will never come. He wasn’t afraid of a woman who shared his strength in body and will. He’d taught her to laugh again. And when she looked into Eric’s face—the face of a true warrior of the Norse, broad and handsome and fearless—she could not help but love him.

“I’m headed for the shower,” Eric said, catching her glance and giving her a sly look in return. He padded toward her, remarkably graceful and light on his feet, his naked chest streaked with sweat. He lifted a tendril of her hair, rolling it between his fingers. “Care to join me? I’ll wash your back if you’ll wash mine.”

His meaning couldn’t be clearer, and she was eager enough to join him in bed after his long absence. But she dodged aside when he bent to kiss her.

“There’s something I have to take care of first,” she said, smiling to take the sting out of her rejection. “I’ll join you in a few minutes.”

Eric frowned and rubbed his thumb along the edge of her jaw. “You okay? You’ve seemed a little preoccupied ever since I came back”

She covered his hand with hers. “It’s nothing. I missed you, that’s all.”

Eric let her go and winked. “My sword is always at your service, m’lady.” He strode away, and Mist was left wondering what was wrong with her.

But of course she knew. Over the past few months, truly happy for the first time since her voluntary exile, she had begun to acknowledge just how much she had changed. Little by little she had accepted the unthinkable: she had truly become a part of this world … the world that had survived Ragnarok’s ice and fire. Midgard, a place without magic or gods who intervened in the affairs of men.

Of course Midgard’s very survival was a puzzle in itself. The prophecies had foretold destruction and renewal, a new beginning for gods and mankind in a paradise of peace and plenty.

No such paradise had ever arisen. War and famine and sorrow continued unbroken, and the Aesir were forgotten. No one, not even the sons of Odin himself, would come to claim the treasure she guarded. It had become obsolete. Like her.

With a sigh Mist walked out of the exercise room, past the workshop that occupied a third of the warehouse flat and into her small kitchen. She could hear Eric singing in the shower. Lee, his coat shining from a recent brushing, jumped on the kitchen table and chirruped, demanding his rightful share of affection. Kirby bounded up beside him, green-gold eyes far too intelligent for any ordinary cat.

Mist picked Kirby up and stroked his dense gray fur. Breeders called them Norwegian Forest Cats now; millennia ago they had been sacred to the Lady.

“Do you think it’s the same with the others?” she asked him. “Have they given up, too?”

Kirby licked her hand sympathetically. He didn’t know any more than she did. She’d lost contact with the other Valkyrie decades ago. Only two other survivors of the final battle lived in San Francisco; when she’d first settled in the City by the Bay, she’d harbored some hope that the sons of Odin would provide companionship and keep her focused on her cause.

It hadn’t turned out that way. Vidarr and Vali had come to the conclusion that their duty to the past was finished. Mist had despised them for it.

Now, settled in a life with a man she had come to love–a life where her only “enemies” were muggers, petty thieves and the occasional gang-banger—she finally understood.

Setting Kirby back on the table, she gave Lee a brief pat and walked down the short hall to the second bedroom. The rune-wards that guarded the door had never been disturbed except by Mist herself. She released them with a word, lifted the key on its chain from around her neck, and unlocked the door.

Two dozen swords, axes, daggers and knives, each lovingly forged by her own hand, hung in oak and glass display cases built into the walls. Mist locked the door behind her, passed by the swords and axes and went directly to the knife case, which held eight weapons with hand-carved grips and edges sharp enough to rend flesh like tissue. Each knife was unique, but no one of them appeared substantially different from any other except in subtle elements of design and embellishment.

The one she chose, like the others, was perfectly balanced for a hand that would never wield it in battle, a fine object that might have found a home in some collector’s case among his or her other most valued possessions. But when Mist closed her fingers around the grip, it sang. Sang of a past she could scarcely remember. An axe age, a sword age. An age of heroism and blood and doom.

Mist knew the Galdr. She knew the runes and spells and songs, though her skill was only enough to guard what she held in her hand and ward off muggers or parking tickets. The chant she sang now came without thought, for she had sung it a hundred times. A thousand.

The knife shuddered in her fist. Then it began to grow, the blade widening, the grip lengthening inch by inch until it was as long as her arm, long enough to touch the floor and reach above her head.

Gungnir. The Swaying One, the spear that could not miss its mark. The magic weapon Odin had entrusted to her in the final moments of his life, as he and the Aesir had entrusted the other treasures to her sisters.